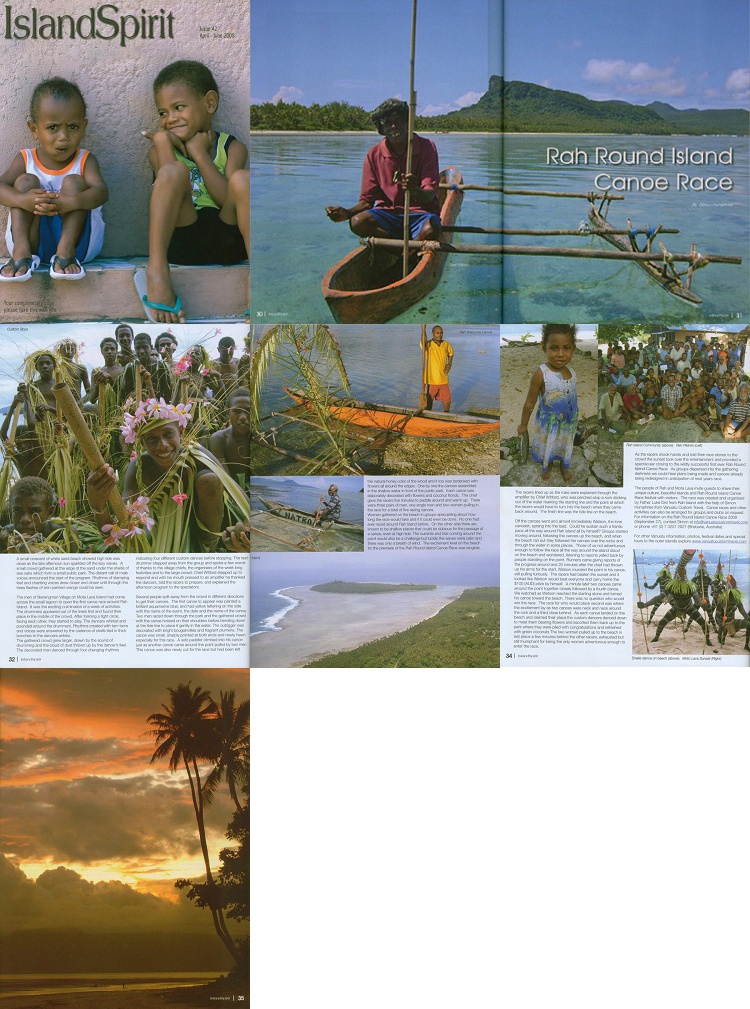 A small crescent of white sand beach showed high tide was close as the late afternoon sun sparkled off the lazy waves. A small crowd gathered at the edge of the sand under the shade of sea oaks which form a small public park. The distant call of male voices announced the start of the program. Rhythms of stamping feet and chanting voices drew closer and closer until through the trees flashes of skin painted orange could be seen.

The men of Nereingman Village on Mota Lava Island had come across the small lagoon to open the first canoe race around Rah Island. It was the exciting culmination of a week of activities. The drummers appeared out of the trees first and found their place in the middle of the crowd. After forming a tight circle, facing each other, they started to play. The dancers whirled and pounded around the drummers. Rhythms created with tam tams and voices were answered by the cadence of shells tied in thick bunches to the dancers ankles.

The gathered crowd grew larger, drawn by the sound of drumming and the cloud of dust thrown up by the dancer’s feet. The decorated men danced through four changing rhythms indicating four different custom dances before stopping. The lead drummer stepped away from the group and spoke a few words of thanks to the village chiefs, the organisers of the week long festivities and to the large crowd. Chief Witford stepped up to respond and with his mouth pressed to an amplifier he thanked the dancers, told the racers to prepare, and explained the afternoon program to the spectators.

Several people split away from the crowd in different directions to get their canoes. The first canoe to appear was painted a brilliant aquamarine blue, and had yellow lettering on the side with the name of the event, the date and the name of the canoe. Two men raced down through the park and the gathered crowd with the canoe hoisted on their shoulders before bending down at the tide line to place it gently in the water. The outrigger was decorated with bright bougainvillea and fragrant plumeria. The canoe was small, sharply pointed at both ends and newly hewn especially for this race. A solo paddler climbed into his canoe just as another canoe came around the point pulled by two men. This canoe was also newly cut for the race but had been left the natural honey color of the wood and it too was bedecked with flowers all around the edges. One by one the canoes assembled in the shallow water in front of the public park. Each canoe was elaborately decorated with flowers and coconut fronds. The chief gave the racers five minutes to paddle around and warm up. There were three pairs of men, one single man and two women pulling in the race for a total of five racing canoes.

Women gathered on the beach in groups speculating about how long the race would take and if it could even be done. No one had ever raced around Rah Island before. On the other side there are known to be shallow places that could be dubious for the passage of a canoe, even at high tide.

The currents and tide coming around the point would also be a challenge but luckily the waves were calm and there was only a breath of wind. The excitement level on the beach for the premiere of the Rah Round Island Canoe Race was tangible. The racers lined up as the rules were explained through the amplifier by Chief Witford, who was perched atop a rock sticking out of the water marking the starting line and the point at which the racers would have to turn into the beach when they came back around. The finish line was the tide line on the beach.

Off the canoes went and almost immediately Watson, the lone canoeist, sprang into the lead. Could he sustain such a frantic pace all the way around Rah Island all by himself? Groups started moving around, following the canoes up the beach, and when the beach ran out they followed the canoes over the rocks and through the water in some places. Those of us not adventurous enough to follow the race all the way around the island stood on the beach and wondered, listening to reports yelled back by people standing on the point. Runners came giving reports of the progress around and 20 minutes after the chief had thrown up his arms for the start, Watson rounded the point in his canoe, still pulling furiously. The racers had beaten the sunset and it looked like Watson would beat everyone and carry home the $100 (AUD) prize by himself. A minute later two canoes came around the point together closely followed by a fourth canoe. We watched as Watson reached the starting stone and turned his canoe toward the beach. There was no question who would win the race. The race for who would place second was where the excitement lay as two canoes were neck and neck around the rock and a third close behind. As each canoe landed on the beach and claimed their place the custom dancers danced down to meet them bearing flowers and escorted them back up to the park where they were plied with congratulations and refreshed with green coconuts The two women pulled up to the beach in last place a few minutes behind the other racers, exhausted but still triumphant for being the only women adventurous enough to enter the race.

As the racers shook hands and told their race stories to the crowd the sunset took over the entertainment and provided a spectacular closing to the wildly successful first ever Rah Round Island Canoe Race. As groups dispersed into the gathering darkness we could hear plans being made and canoes already being redesigned in anticipation of next years race.

The people of Rah and Mota Lava invite guests to share their unique culture, beautiful islands and Rah Round Island Canoe Race festival with visitors. The race was created and organised by Father Luke Dini from Rah Island with the help of Simon Humphries from Vanuatu Custom Travel. Canoe races and other activities can also be arranged for groups and clubs on request. For information on the Rah Round Island Canoe Race 2008 (September 27), contact Simon at info@vanuatu.com.au or phone Sure Thing Travel for reservations on (02) 8212 4507 (Australia) .

For other Vanuatu information, photos, festival dates and special tours to the outer islands explore www.vanuatucustomtravel.com

Life in a Tropical Garden of Eden.